Ben Kite has made his first defence of the Australian title against a very game Daniel Kennedy.

The bout was fought at a high pace, with Kite establishing dominance early with accurate jabs and a high punch output. Kennedy was cut over the left eye in round 3 from a punch. An accidental head clash midway through the fight saw Kite cut to the left side of his head. Kite unfazed, continued his dominance cutting Kennedy again over his right eye from more accurate and sharp punching. Another head clash saw Kite cut between the eyes in round 7.

A combination of Kennedy’s exhaustion and Kite’s increased tempo, saw Kennedy hit the deck twice in the final round which ended the fight. Kite was well ahead on the score cards. 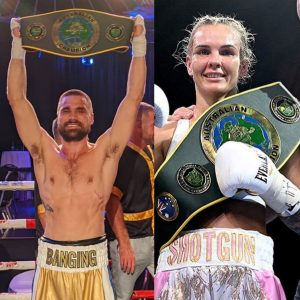 Fighters of the year announced